While searching on the Internet for books with my former home town name Bannockburn in their titles, I found and downloaded Bannockburn and Other Poems (Religious and Secular) by George Minton Rathbone in 1876. I firstly read the poem Bannockburn and was fairly impressed by its story told in rhyming couplets.  v.i.z.

'Twas on the twenty-fourth of June, thirteen hundred and fourteen,
That by the banks of bonny Forth the English first were seen,
Their banners waved so proudly as slow they marched along
Of knights, and peers, and men-at-arms, one hundred thousand strong.
There were archers from Derwentdale, and vassals from Tourraine,
Barons bold from Burgundy, and knights of warlike Spain.
Brabant sent her Flemish spears, Germania stalwart men,
And France sent forth her bravest troops, the flower of Guienne.
There were Irish kernes from Munster's coast, and Welshmen with each sling.
All doomed to fall before the sword of Robert Bruce our king.
Ah ! little recks each haughty knight, who now lifts high his head,
Another sun may number him with the dying and the dead ;
And he who holds possessions now, with many a serf and slave,
May very soon breathless lie in his only home ... the grave.
But there is one the first of all, who in bright splendour shone,
'Tis Edward of Caernarvon, who held proud England's throne.
His robe of richest crimson, is fringed with costly gold,
His armour bright of silvery white, was dazzling to behold.
"Sound, trumpets sound ! " he cried, ''and let the welkin ring,
We'll soon defeat these Scottish knaves, and Bruce their rebel king."

Spread o'er the hill in firm set ranks, in steel and tartan plaid.
The Scottish warriors round their king stood firm and undismayed.
Young Randolph drew his maiden sword, to battle for the right.
And Douglas by the Bruce's side rushed in the thickest fight.
Kirkpatrick, Lindsey, Dallzell, Home, M'Donald of Glendhu,
With Stuart of the royal race the bravest of the true,
All spurred their steeds and drew their swords to conquer or to die,
Against Edward's overwhelmning force and all his chivalry ;
From hill to hill their rallying cry to Englishmen they fling,
For Scotland our poor country and Bruce our patriot king.
By Stirling's massive tower, that day, the Scotchmen took their stand.
To fight for home and country and save their native land.
Oh, fierce the battle fought that day upon the purple heath,
When a nation fought for victory, or win a glorious death ;
But England mourned that fatal hour, upon that well-fought plain,
As she left upon the bloody field her thirty thousand slain ;
While Edward fled so swiftly without a wound or scar,
To hide himself in safety in his strong castle near Dunbar.
Then glory to that noble band, let future ages sing,
The noble field of Bannockburn, and Robert Bruce our King.

Returning then to the start of the book, I immediately realised that some of his early poems contained elements of tragic biography and autobiography as their subjects.Thereafter, I found similar compositions scattered throughout. These made me curious to find out as much as I could about Mr Rathbone. In the event I had to be content with minimal discoveries about his genealogy by matching who he was writing about in his poetry with available birth/marriage/death and census information.

My finds can now be studied in the following .jpg images .. 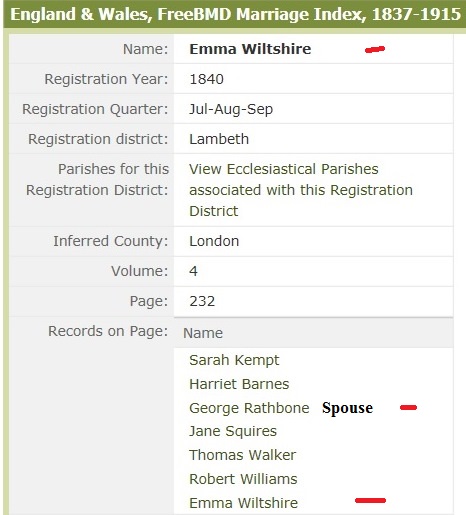 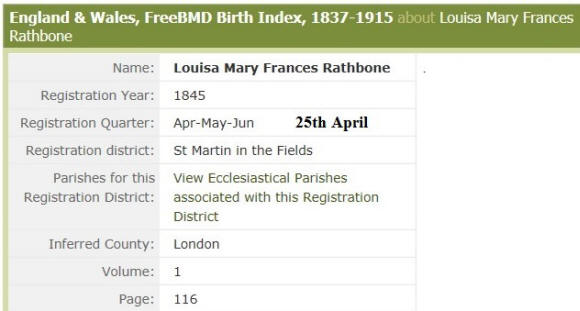 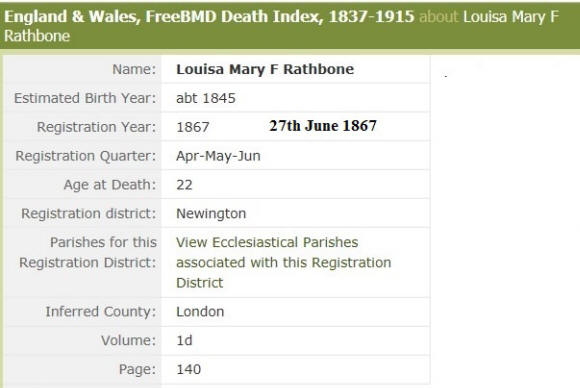 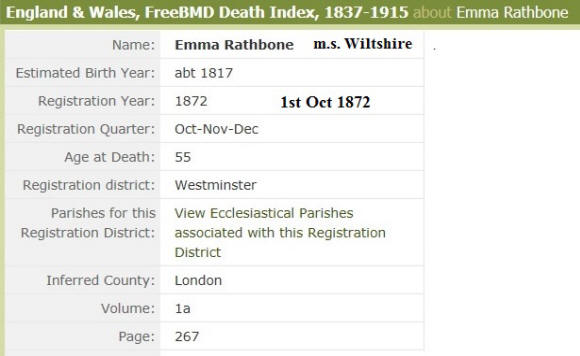 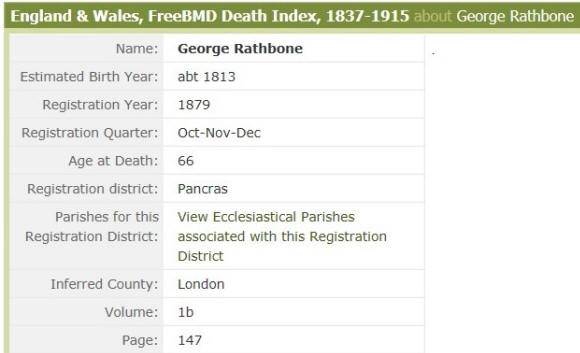 However, the poems are not all 'gloom and doom', as you will read in this one...

To-morrow's the twenty-fifth of December,
In the year Eighteen Thirty-nine,
But I cannot at present remember,
I have been invited this Christmas to dine.
I called the other day at Mayfair,
On Lord Corpulent, who tries to look thinner,
Though I kept praising his wine, I declare
His lordship never asked me to dinner.

There's Lady Eosaline Eanter the sage.
Who belongs to the blue-stocking crew ;
I left her last time in a rage.
Through hinting her works were not new.
She gives a grand party they say.
To some poets and a long novel spinner.
But her footman denied her one day.
So I have lost there my chance for a dinner.

I called upon Ben Bobtail the broker,
Who resides amidst the fog in the city.
And prides himself as a great joker.
And believes he is monstrously witty.
I talked of his stables at Reigate,
Of his horse the thousand pound winner.
But alas ! to a party at Highgate,
He was invited on Christmas to dinner.

I next went to my old flame Miss Marrow,
But vexations, she was not at home.
She had gone to her uncle's at Harrow,
Who from India had lately come home.
But I trust in the course of next year.
To be able to woo and to win her.
And then in that case I don't fear.
Next Christmas to be without dinner.

There's my friend little Tomkins the tailor,
Who generally dines off a goose ;
I'll call and clinch him with a nailer,
For surely he will not refuse.
But if he should there's my old nurse.
Who dwells in her cottage near Pinner,
I'll go, for I might fare much worse,
Than have bacon and cabbage for dinner.

So Betty, bring down my great coat.
It is just ten and I must be off.
I shall start by the Westminster boat.
And get out at the Hungerford wharf.
And if any should call while I am out,
Now mind what I say, you old sinner ;
Tell them I am gone to a grand ball and rout,
And then to Lord Melbourne's cabinet dinner.